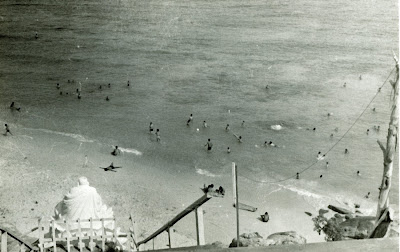 Banh tieu is not something most people would think of when they think of Vietnamese food.  It's not sophisticated.  There are no complex sauces or elaborate accompaniments.  You'd be hard pressed to find it on the menu of any Vietnamese restaurant, and it's not something many people make at home.  Yet, I imagine for most Vietnamese, banh tieu is a treat that evokes as many memories as Proust's madeleines.  For me, banh tieu always reminds me of Pulau Bidong.

In 1981 I was living in Sacramento, going to graduate school and teaching ESL to refugees from Southeast Asia.   As a result of the fighting between Vietnam and China, large numbers of ethnic Chinese fled  northern cities and sailed to Hong Kong.  Refugees from the south, ethnic Chinese as well as many former soldiers for the South Vietnamese army or officials in the South Vietnamese government, sailed to Thailand, Malaysia, Indonesia, and the Philippines.  At the same time refugees were also fleeing Cambodia and Laos.  Sacramento suddenly found itself with an exploding population of Khmer, Lao, Vietnamese and ethnic Chinese with varying levels of education and exposure to western culture.  Pockets of refugees settled among the worst areas of town and local community agencies struggled to meet their many needs.

I was working for Catholic Social Services. My supervisor at the time, a young woman about my age, happened to mention that there was a need for teachers in Bataan, at the processing center that was just being set up to help refugees who had been accepted for resettlement in the US.  She had been selected to go, but then backed out at the last minute.  She gave me some information about how to apply and I did.  There were no openings for Bataan, but there was a need for teachers in Malaysia if I were interested.  I jumped at the chance.

I arrived in Malaysia in March, 1982.  I was a Peace Corps sponsored United Nations Volunteer, making $500 a month.  Life was good.  My first weeks there, I was put up at the  Majestic Hotel, a colonial hotel with immense rooms and a staff that had been there for ages.  The menu for each night's dinner was typed, typed--not printed--on 4 x 8 inch cards.  Were you an expatriate Brit, the food would have comforted you.  Gin tonics were served by ancient Chinese waiters with an attitude more starched than their uniforms.  The veranda looked over the colonial railroad station, with the burgeoning Kuala Lumpur in the background. 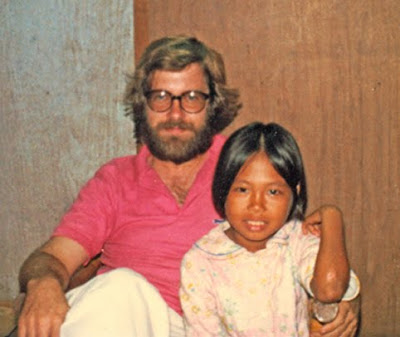 My first months in Malaysia were spent working at Sungei Besi camp on the outskirts of Kuala Lumpur (KL).  This was essentially a transit camp for refugees who had been accepted for resettlement. Most refugees spent no more than a couple of months there at the most before they moved on to their new lives overseas.  The camp was on the outskirts of KL.  It was bleak, dusty, barren, a fenced in group of barracks on red clay that felt the full force of the tropical sun and rains.  We were bussed into the camp each morning and taken back to KL each evening.  There were four or five of us teaching English classes and helping refugees teach classes.  Although it was great being in KL again, commuting to the camp was not what any of us really had signed up for.  We wanted to be on the island, Pulau Bidong.

In May I got word of my transfer to Bidong.  Pulau Bidong is an island that is about two square miles in total area, half of which was inhabited.  At the height of the exodus from Vietnam in 1979-1980 as many as 30,000 refugees were crowded onto the island.  When I arrived, the population was down to around 10,000. 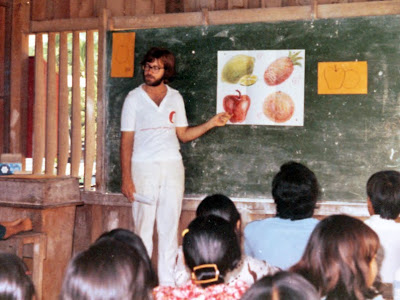 I was a teacher-trainer, one of five, who taught refugees to teach English.  Many of our teachers spoke no more than a rudimentary level of English themselves.  The teacher-trainers were also responsible for administering the different schools on the island.  I was fortunate and got assigned to the Zone F school, a two room school overlooking the nicest "public" beach on the island.  There were some nicer beaches to the northeast, but refugees were banned from them.

Food and water had to be brought to the island by supply boats.  The refugees lived in barracks and shacks constructed from salvaged boards and sheets of plastic.  Staff had slightly better accommodation, but shared latrines and showers.  We paid a small fee to eat dinner at the Coconut Inn, a restaurant staffed by refugees as part of a vocational training program run by a Christian organization.  Some staff ate lunch there as well; I usually bought a sandwich in the market or cooked some noodles and tofu.

One thing that Vietnamese seem to bring with them wherever they go is banh mi, the great crusty demi-baguettes. This legacy of French colonialism thrived even on Bidong.  You could not find bread half as good in nearby Kuala Trengganu.  Of course, with the bread also comes the coffee and the cafes.  For the refugees who had no idea how long they would be on the island, who had risked everything (and some who had lost almost everything, had been raped, robbed, and beaten, and had seen friends and family drown), the cafes were a place to reminisce about their past lives and dream about their futures.

Delegations from resettlement countries (primarily the US,  Australia, and Canada) caused a buzz whenever they arrived on the island.  Loud speakers placed all across the populated portion of the island made announcements from dawn until the electricity was cut at night.  Even when there were no delegations on the island, there were interviews by UNHCR, health checks and other activities.  When the delegations were there, the tension on the island ramped up several notches.  Being accepted for resettlement meant that you would soon be moving on to a new life.  Being rejected meant at least another six months on the island with little hope of being accepted by the next delegation.  Australia had a reputation for picking attractive single women.  Canada was said to favor well educated refugees who had professional skills.  The US based their approvals on family reunification or ties with the South Vietnamese government.  When a delegation approved many applicants, the cafes were busy for the following nights.  But when the rejection rate was high, a dark cloud descended on the island.  There were fights, and suicides; the mood affected everyone on the island.

One time, I believe it was near Thanksgiving, an American delegate was sent to the island for four days.  November was a quiet time on the island.  It was the monsoon season, so there were few new arrivals; only the most desperate attempted escaping Vietnam during the monsoons.  Water and food sometimes faced increased rationing because the supply boats from KT could not reach the island.  The delegate was doing some routine cases, already pre-screened, everyone apparently qualified for resettlement.  However, he had requested the time off and resented being sent there, especially during that month, so he rejected every single case.  I've worked at places where morale has been low, but nothing else has come close to the mood of the camp after his rejections.

It was on Bidong that I first tasted banh tieu.  I don't know if it was the setting, the skill of the cook, or what, but to this day I've never had banh tieu any better than I had there.  Like banh mi, these seem to be wherever there are Vietnamese.  Like all fried foods, banh tieu are best right out of the fryer; they're  light, but chewier than a doughnut with a subtle sweetness.  The sesame seeds add just the right touch. Like doughnuts, they are excellent with coffee. 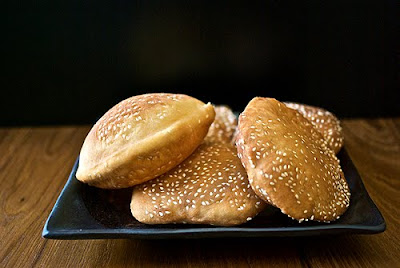 Finding a recipe for banh tieu wasn't easy.  I did a Google search and came up with numerous recipes, several that seemed promising, but when I tried them they turned out doughier breads.  They were tasty, but they weren't what I consider banh tieu.  In the end, I cobbled together a recipe from others I tried.  This recipe finally produced the puffs and had the proper taste.  They are not as good as the ones I had on Bidong, but nothing can match what lives on in memory.  If you follow the recipe, you will enjoy some good banh tieu.  A printable version of the recipe is here. 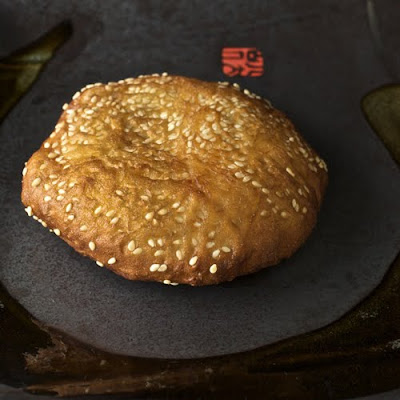 Sesame seeds for rolling the dough balls in

Make a sponge by mixing the first four ingredients in a mixing bowl.  Cover and let sit at room temperature for 4 to 6 hours.

Stir the next four ingredients into the sponge.  Add enough flour to make a fairly stiff dough.  Knead well for five minutes until the dough is smooth.  Place in a clean bowl and cover with a damp towel.  Let rest at least one hour.  (This will not rise noticeably.)

In a wok or a deep fryer heat the oil to 370º.  Lower a disk into the hot oil.  As soon as it rises to the surface, turn it over.  After a few seconds one portion of the dough should begin to bulge.  Press down on this air pocket and the whole disk will inflate like a puffer fish.  As soon as the dough takes on color, remove from the oil and drain.  Each piece takes about thirty seconds or less.  Enjoy with a good strong cup of coffee. 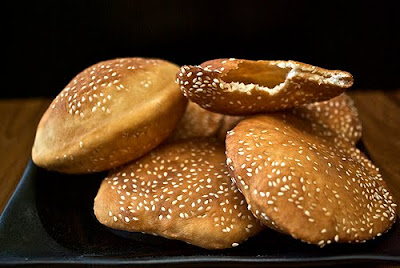 I'm submitting this for Delicious Vietnam #2, hosted by Ravenous Couple.

Below are some pictures from Pulau Bidong.  Although cameras were not allowed on the island, one day we were asked to take some pictures to document something for the UN or MRCS (Malaysian Red Crescent Society).  I forget what the reason was, but we were able to go around a get a number of pictures that day.  These are from September or October, 1982.


Get the flash player here: http://www.adobe.com/flashplayer
Posted by sijeleng at 3:52 PM