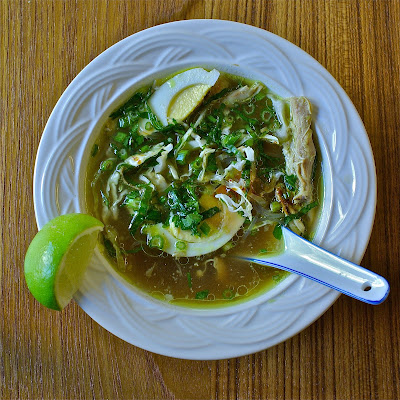 Soto Ayam, the flavorful chicken soup from Indonesia, is what I used to eat for lunch three to four times a week when I lived in a small town in Central Java for several years from 1983 to 1985. I would usually have a half portion of that or of gado-gado at Rumah Makan Murni on Jalan Diponegoro in Cepu. Occasionally I would have the Opor Ayam, but I was almost always torn between the gado-gado and the soto. To this day, I've never had gado-gado that approaches that made by Tien and her sister at Rumah Makan Murni. Their soto ayam was also the best I've ever had, but I've enjoyed many other versions that have been almost as good.

Soto Ayam is a dish that lends itself to regional variances. It is, after all, chicken soup, and each town seems to have its own idea of what to include in it. Some include cloves in the spices; others use cumin or even cinnamon. As long as your broth is decent, whatever version of soto you try is going to taste good.

Soto is personalized by how you choose to garnish it. Fried shallots are a must (and they should be relatively fresh, not those awful things in plastic containers you can buy in Asian markets here). I also like fried garlic in mine. A drizzle of kecap manis and a squeeze of lime are also standard. A dab of sambal is usually added with the kecap and lime. Chopped cabbage, bean sprouts, and Indonesian celery are other elements to add or omit according to personal preference and availability. Quartered, boiled eggs are usually included in the bowl. I always used to have soto with the lightest, perfectly fried krupuk ikan Palembang when I lived in Cepu. My wife loves it with potato chips. Serve it with rice or slices of lontong.

3 TBS oil
2 oz bundle of soun (cellophane noodles), soaked in boiling water for ten minutes or so until softened. Drain and cut in half or thirds.
1 TBS lime juice

Prepare the broth by covering the quartered chicken with the water. Add the lemongrass and kaffir lime leaves. Bring to a boil, then lower to a moderate simmer and cook for about 45 minutes, skimming foam from the surface every ten minutes or so as needed to get a clear broth.
Remove chicken from broth and allow to cool. Tear into small shreds and reserve. (You may include the skin or not according to your preference.)

Grind the pepper and seeds in a coffee grinder or in a mortar with pestle until finely ground. Add other ingredients to the mortar and continue to grind until you have a smooth paste, or use a blender or small food processor. You want to have a fairly smooth paste without small pieces of garlic, shallot, turmeric, ginger or laos.

Heat the oil in a two quart saucepan and fry the spice paste over medium-low heat for about five minutes, until the paste begins to separate from the oil. Ladle a little of the broth into the pan with the spice paste. Stir and add this back to the pot of broth, along with the shredded chicken and lime juice.

To serve, put cellophane noodles into individual bowls. Ladle broth onto the noodles and allow diners to select which garnishes they prefer. In Indonesia this is usually served with a bowl of rice or lontong which diners then eat with the soto.
Get the flash player here: http://www.adobe.com/flashplayer
Posted by sijeleng at 12:46 AM